Note: this was originally posted on a Substack newsletter that I abandoned after two issues. Here’s the second one, converted to a regular blog post.

Hey! Thanks to everyone who read Hardscrabble #1 in July. I have to acknowledge: I said it would be a weekly thing and then let it sit for like seven months without sending a second email. I think I’ve learned some lessons about expectations-setting, because this introduction is about to end.

Today, as usual, I have a story from my life, an observation from work, a cultural recommendation, and some hyperlinks. Hope you’re taking care of yourself.

A story from my life 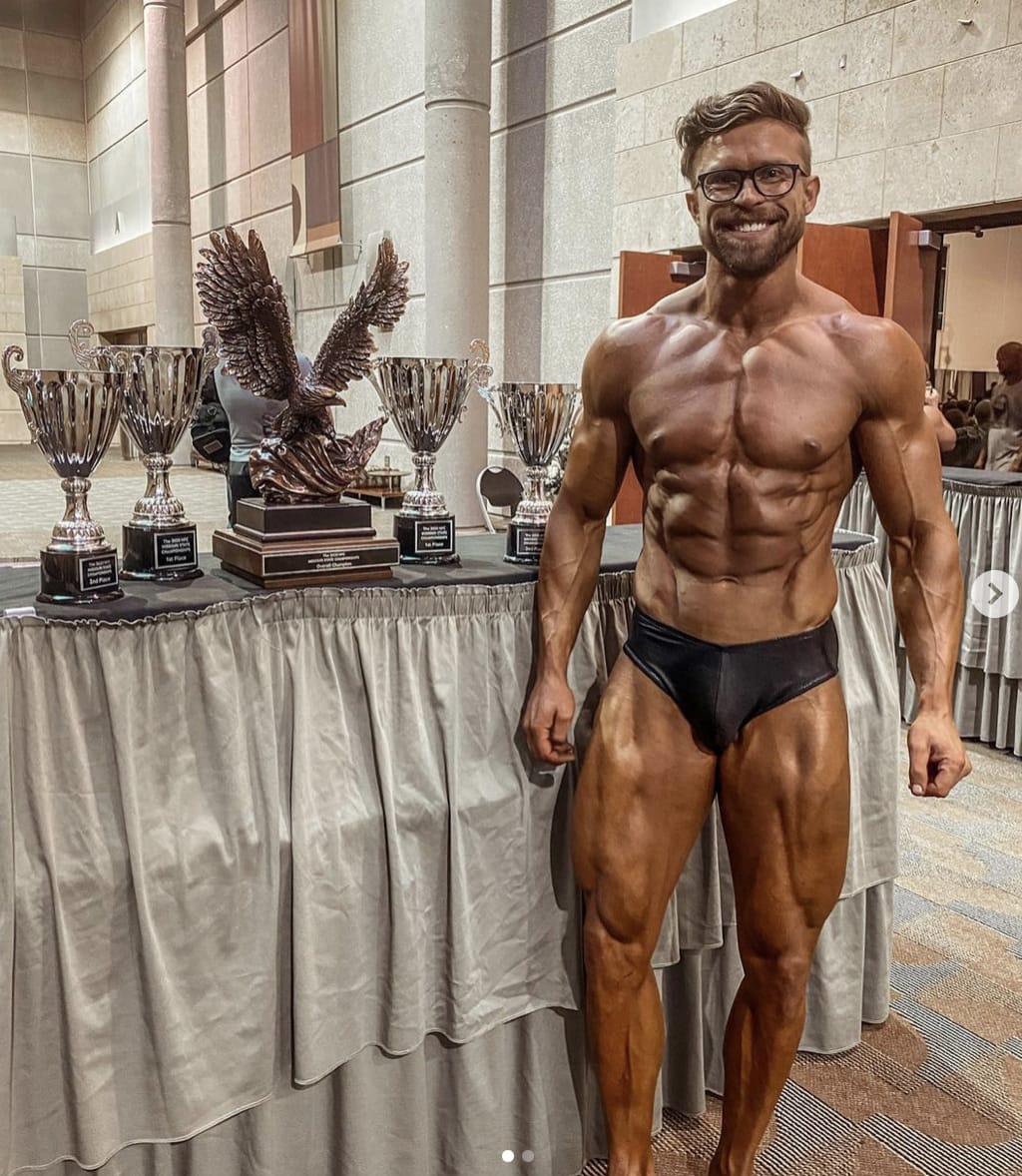 In July last year, I called up a bodybuilder named Will, who I follow on Instagram, and chatted for about an hour. He was at his day job, where he does graphic design for a newspaper. A few days earlier, he had competed in his first event, The Missouri State Championships, and won the novice division. What was it like training and competing for that during a pandemic, I wondered.

I also had a bit of an ulterior motive. Will and I crossed paths on the internet almost ten years ago, and became Internet Friends. We shared a common interest: Apple gadgets, and the loose network of bloggers and podcasters who talked about them. Both of us had set up personal blogs modeled after Daring Fireball, which meant that they were mostly short posts linking to other blogs with our commentary tacked on. This was the thing to do at the time, for a particular kind of nerd, resulting in a shaggy, growing constellation of blogs which kept my Google Reader account full of takes each day.

Will and I gradually fell out of touch as we outgrew our shared interest, but we still followed each other on social media. I’m sure you have friendships like this, where you don’t talk to each other, but you sporadically see each other’s updates, when the algorithms happen to allow it. People’s lives move in fast forward when you aren’t paying attention to them.

Will physically transformed in a pretty dramatic way. I wondered whether I had transformed, too, from his perspective. I spent those years focusing on establishing a career in tech. Like his thing, it required a lot of dedication. Is that the same?

I’ll share a few excerpts from our conversation, lightly edited for clarity.

Most of the people who follow me [on Instagram], up until recently, weren’t bodybuilding or fitness people, they were just like, normal people, so they get a peek into this weird, crazy lifestyle.

Yeah, that’s sort of where my fascination came from. There’s this feeling of like, could I do that? If I actually dedicated, you know, five-plus years —

Literally, anybody can.I feel like with this sport, you can super nerd out in it. There’s science behind the training, science behind all the nutrition. You can really nerd out on every single detail. You just get lost in YouTube videos about proper training, proper diets, why you eat certain foods, what is effective. Like, bro science versus real science. Like, bro science is kind of what works and what people have done. Real science says this, but bro science says “Yeah, but if you do this, it works.”

Wait, what are you saying?

You can’t always listen to the science, sometimes you’ve got to listen to your body. “For my body, we tried it the science way, and it didn’t really work. I’m gonna try it the way this huge bodybuilder dude told me he did it.”

To be clear, I don’t personally want to become a bodybuilder. But I like believing that I could, if I wanted to, according to someone who’s done it. Transformative change usually feels impossible, but it happens all the time. It just requires commitment:

It’s such a weird lifestyle. No joke. You’ve got to be partially insane, obsessed to want to do this. It’s fitness, but to such an extreme that, to a normal person, it’s hard to understand. My mom is like, “Why are you doing this?” Because I’m, like, suffering while they’re all enjoying this great food. They came to visit when I was two weeks away from the competition. They’re having a birthday party, celebrating, pizzas, I’m eating these boring chicken and rice and broccoli meals. And it’s like “Ah, it’ll be worth it…“

And it takes time:

I set out to do this two years ago. The goal was to compete in a competition, and then after after a year it was, I want to win one. I have no problem waiting. That’s the thing about bodybuilding, is it takes a long time. When I first started, I knew that in ten years I would probably be where I want to be. That’s how long this thing takes. And I’m six years into it. I’m like halfway from my original ten year idea. I have no problem, if I want to do this, but it might take two years. And then a year later, it’s “in a year, I think I’ll be ready”. And even now, I probably could’ve waited another year. But I was just itching to do it.

I think that’s what a lot of people struggle with, with fitness, is the long term nature of it. This is something that I can speak to from experience, the fact that it takes time is partly what gives you that sense of accomplishment, but it’s also what can be very frustrating about it if you don’t have that perspective that you expect it to take that long.

Yeah. I always thought, five years is going to pass. I’m going to be forty eventually. So I can either do this, and then at forty I’ll be really happy with where I’m at or I can not do it and I’ll be at the same exact place that I’m at.

The big question, of course, is: why?

For Will, the milestone he was working toward was his first competition. Perhaps you already know what happens at a body building competition, but I didn’t. I asked if it’s like, who can lift the most?

No, that would be a powerlifting competition. There’s nothing physical. You’re judged on your muscular size, symmetry and proportion, and then “conditioning” which is how lean you are. Your hamstrings and your glute muscles only start to show when you’re really, really, really lean. They judge everybody standing next to each other, and then you have a couple hour break, and we all come back, and then we did our little routine to music.

The routine is about a minute long. In it, Will cycles through almost twenty poses, flexing various muscles, wearing nothing but his glasses and some bikini bottoms (he graciously credits Kitty’s Bikinis in the caption). I think I’d feel a bit exposed, but he looks very comfortable, like it’s the most natural thing in the world to be doing. Like dance, it has both movement and stillness. Will tells me his posing role model is Terrence Ruffin whose work is high art. I have to agree.

Here’s how Will felt onstage:

My heart was racing onstage. I look like a deer in headlights in some of my pictures because I was just so nervous. You want to be able to flex every muscle in your body, but have a completely relaxed face, smiling, looking great, and I just didn’t have that stage confidence for my first time. I was just, heart pounding, trying to listen to my coach who’s yelling at me, telling me what to do.

I hate contacts. And I feel like that’s just part of my look. I wasn’t even sure if you were allowed to wear glasses onstage. I asked my coach, _are they going to make me take these off?

Will was competing in the novice division, which is anyone who has never competed before. He won. He also competed in the open, and came in second. Why not first?

He just had more muscles, so he won. I just have another year or two and then I’ll be able to compete with people. Progress is measured in years.

It’s heartening to me that bodybuilders are also self-conscious about how they look. We talked a bit about Instagram:

I had quite a few unfollow. Which I don’t mind. I’m posting pics half naked, so if you don’t want to randomly see that on your feed, like people from high school, they’re not into it.

One of the reasons I can imagine a guy from high school might unfollow is maybe a bit of homophobia, like “Uh oh, not for me! I can’t look at that!”

Maybe? Maybe. I think it’s more like, they think I’m way too into myself. If I post a crazy picture I try to have a funny caption, or poke fun at myself. But I think people can just be like, “Oh, he’s so into himself.” When really, I post a picture, and I’m like, “Ehh, I wish this was like this, or this is no good, this picture is terrible.”

He tells me about the process of taking a bodybuilding photo for Instagram, most of which are taken by his girlfriend.

It takes hundreds of tries to get the right one. I’m making a dumb face or, to get the portrait mode popping just right, all the things. We’ll take like ten different things that are the same exact pose and it’s just, “All right, let’s try it again.” And if you watch that, it’s like, “Who are these losers?”

It was a good conversation. We covered a lot more, but honestly it’s kind of hard to transcribe and summarize interviews, and I feel like you get the gist. I’ll leave you with this.

Finally, I asked Will about the tech blogs. Do you remember all those characters from that scene? Do you remember that one anonymous blogger who just razzed everybody? Who do you think that was?

I still read Daring Fireball, and that is the only one. I don’t listen to any of the podcasts.

An observation from work

I wrote a few blog posts about coding in the last few weeks:

In December, I wrote a blog post all about Zoey’s Extraordinary Playlist, the NBC musical dramedy that just started up its second season. I really, really love it, to a corny extent.

Note: I don't have comments or analytics on this website, so it's hard to tell if people are reading or enjoying it. Please feel free to share any feedback or thoughts by shooting me an email or tagging me in a post on Mastodon @maxjacobson@mastodon.online.