I just discovered TextBar via this article and it’s a pretty sweet Mac app.

You provide it a script and an interval, and it runs the script over and over, and prints the result to your Mac menu bar.

It comes with a few neat starter scripts which tell you things like how full your disk is and which wifi network you’re attached to.

For some reason, my instinct was to make a script that told me how long it’s been since I updated this blog.

I tried writing it as a shell script but gave up halfway through and switched to Ruby because, as much as I enjoy a challenge, parsing dates with the Mac date utility was making me sad.

To use it with TextBar, I put this in a file and made it executable, and then just referenced the path to the file as the “Script”: 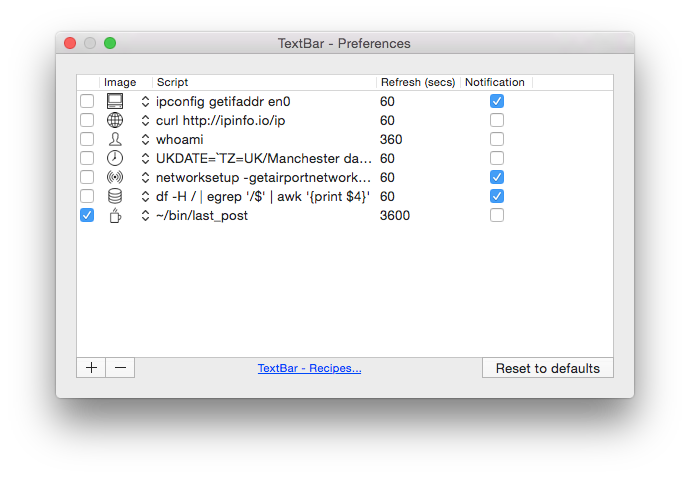 I’m having it refresh hourly, because the script is only specific to the nearest hour, so it’ll always be more-or-less right.

(Tweetbot, this script via textbar, postgres, 1password, dropbox with some notification?, google drive, alfred, caffeine, and then some native Mac stuff)