don't let me modify my laptop any more please

I’m writing this on a sticker-covered MacBook Pro my Grandma bought me 3.5 years ago. It’s a pretty powerful Mac. I thought I wanted to be a freelance video editor then. I bought the controversial Final Draft X around that time too.

I haven’t edited more than few personal videos, but I’ve used this to write a lot of code and I think I’ve benefited from it having a powerful processor1

I don’t really know anything about hardware, but I’ve nonetheless made a few hardware upgrades over the years. Less than a year after getting the computer, I upgraded the RAM from 4 to 8 GB: 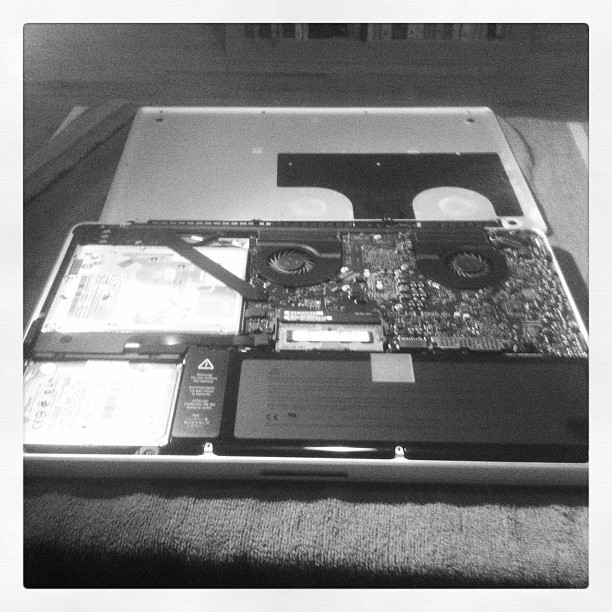 That was pretty easy. You just have to unscrew the bottom off, pull out the old RAM, and add the new RAM (which you bought from Amazon or Newegg or something) and then screw the back on again. It uses normal little phillips head screws.

That worked out for a few years. Then it starts feeling slow again. I’ve come to understand that SSDs are faster than HDDs and decide to remove the optical drive in my laptop, move the HDD into that position, and add a new SSD in the position of the original HDD, and then use the SSD as my primary drive.

I order the parts from the internet and buy a screwdrive set from TekServe and feel very confident. Ultimately I was too confident. This was a super advanced thing to do! I almost ruined my computer. 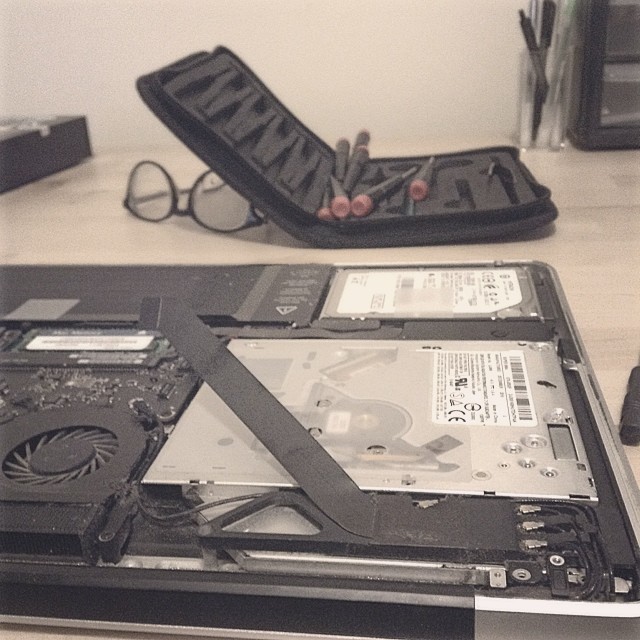 Basically: stripped screws are the bane of my hardware existence. What do you do when you need to remove a screw so you can remove an optical drive, but the screwdrive spins and the screw stays put? What the hell do you do?

On some level I believe there’s a solution to every problem. Sometimes the solution is more dramatic. When I can’t remove a screw from some fixture, I do the next best thing and destroy the fixture. In that picture you can see the optical drive on the right, and a plastic-looking arm holdig it in place. It turns out there’s metal underneath the plastic.

Just finished replacing my optical drive with an SSD. It took like two hours and was very stressful. There are extra screws

Fast forward to tonight and I have forgotten how bad I am at this stuff and I have a new mac upgrade mission. I’ve been getting little warnings in the status bar that my battery needs attention. I’m worried the Apple Store won’t service it because of the previous modifications I made, but I find a straightforward replacement instruction set online that makes it seem pretty doable, and I order a replacement battery from Amazon that is half the price of the one Apple sells and I’m preparing to open it up again.

Honestly, I should have heeded the first signal, which was that one of the screws holding the bottom plate in place was slightly stripped and didn’t want to come out easily. I stayed patient and tried a few different screw drivers and ultimately managed to slip it out. I’m feeling pretty good. The bottom plate comes off.

The battery has a sticker on it warning not to try to replace it yourself. I ignore the sticker. The instructions online tell me there are only three screws to remove, but they’re not a typical kind of screw. Luckily, the battery came with a special screwdriver for this purpose. The first two screws come off easily. The third is hidden under the sticker. I have never even lifted this sticker in my life, I swear, but somehow this last screw is pretty stripped, and there’s nothing for me to do. I either have to give up or resort to drastic action. There’s no coaxing this one out.

So what do I do? I find the power drill my dad left at my apartment a few months ago and start fucking up this fixture:

I try prodding and poking and sawing at it with a drill, a pocket knife, with various screw drivers, for well over an hour. I learn more about how the power drill works when suddenly its mouth opens and the drillbit falls out and I have to figure out why.

Something like an hour and a half later the fixture is sufficiently destroyed that I can remove the battery. I’m pretty nervous that I’ve more or less destroyed the entire computer. I figure there’s a good enough chance that the drill would poke through the machine and screen, or I sever the strip that connects the SSD drive to the computer or who even knows?

Because I never really removed the old screw, I just forcefully ripped the old battery from it, the new battery doesn’t really fit. It has a little ear that wants to be fastened down in that same place, but that place is occupied by an old screw fastening nothing. So I ply away the ear, and position the battery fastened by only two screws.

I hold my breath and turn it on. It actually kind of works. The warning light is gone. The “battery health” is 101% now, whatever that means. The estimated duration is still terrible, less than an hour on a brand new battery, but I kind of don’t care. Actually that number is going up as I type this

I feel like I need to wear a promise ring not to ever try and open up this computer again, for my sake and its. It just won’t be a happy thing to do. I hope writing this makes me remember that.

Although, now the HDD isn’t showing up in the list of drives… maybe I should just open it one more time and take a look…

Since my last post, in which I announced version v0.4.0 of film snob and kind of agonized over the decision to mark it as a minor release, I’ve gone ahead and made two more minor releases. I have much less anxiety about it now. In fact, I wish I had been doing that earlier.

I decided to do some release notes on the release section of the GitHub repo, instead of here: https://github.com/maxjacobson/film_snob/releases.

While adding release notes for the very oldest versions, from April, I laughed seeing how stuck I was on v0.3.x, not sure when I was allowed to move forward, and just continuing to add these patch level releases for things that were totally new functionality.

The next big thing I’ll need to decide be when to mark the major release of v1.0.0. I had some ideas about breaking changes that I would like to make, so I thought I would save those for the first major release, but then a very generous stranger implemented those ideas and made some pull requests, so I have to decide if I’m ready to make it happen now. Why not, I guess?